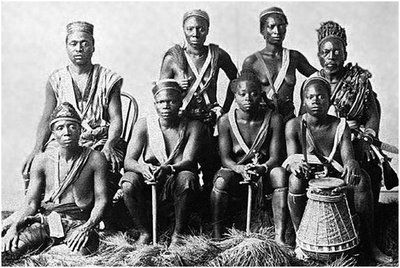 Elite troops of women soldiers contributed to the military power of the Kingdom of Dahomey in the eighteenth and nineteenth centuries. The troops were dissolved following the fall of King Behanzin (Gbêhanzin), during French colonial expansion at the end of the nineteenth century.

Seh-Dong-Hong-Beh (meaning, “God Speaks true”) was a warrior and the leader of the Dahomey Amazons. The Dahomey Amazons or N’Nonmiton, which means “our mothers” in Fon, were a Fon all-female military regiment of the Kingdom of Dahomey in the present-day Republic of Benin which lasted until the end of the 19th century. 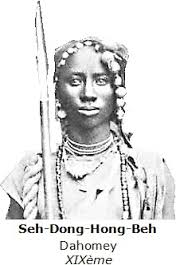 King Houegbadja (who ruled from 1645 to 1685), the third King of Dahomey, is said to have originally started the group which would become the Amazons as a corps of elephant hunters called the gbeto

Houegbadja’s son King Agaja (ruled from 1708 to 1732) established a female bodyguard armed with muskets. European merchants recorded their presence. According to tradition, Agaja developed the bodyguard into a militia and successfully used them in Dahomey’s defeat of the neighbouring kingdom of Savi in 1727. They were organized around the year 1729 to fill out the army and make it look larger in battle, armed only with banners. The women reportedly behaved so courageously they became a permanent corps. The group of female warriors was referred to as N’Nonmiton, meaning “Our Mothers” in the Fon language, by the male army of Dahomey.

From the time of King Ghezo (ruling from 1818 to 1858), Dahomey became increasingly militaristic. Ghezo placed great importance on the army, increasing its budget and formalizing its structure from ceremonial to a serious military. While European narratives refer to the women soldiers as “Amazons,” they called themselves Ahosi (king’s wives) or N’Nonmiton (our mothers). Seh-Dong-Hong-Beh, the fiercest of them all, a gallant warrior and a leader. In 1851, she led an all-female army consisting of 6,000 warriors against the Egba fortress of Abeokuta. Though they were defeated in the two furious assaults on the town, in 1851 and 1864 which was the first time they tasted defeats. They failed dismally, partially because of Dahomean overconfidence, but mostly because Abeokuta was a formidable target — a huge town ringed with mud-brick walls and harboring a population of 50,000.  In about 1889, Seh-Dong-Hong-Beh and her female troops were involved in an incident that resulted in a full-scale war. When the french annexed Porto-Novo, a part of the Abomey kingdom which had not been concessioned to the French.

According to local oral histories, the spark came when the Dahomeans attacked a village under French suzerainty whose chief tried to avert panic by assuring the inhabitants that the tricolor would protect them. “So you like this flag?” the Dahomean general asked when the settlement had been overrun. “Eh bien, it will serve you.” At the general’s signal, one of the women warriors (Seh-Dong-Hong-Beh) beheaded the chief with one blow of her cutlass and carried his head back to her new king, Béhanzin, wrapped in the French standard.

She was also part of Béhanzin’s larger army that took part in the First Franco-Dahomean War, which ensued in 1890, resulted in two major battles, one of which took place in heavy rain at dawn outside Cotonou, on the Bight of Benin.

It would be noted that following the defeat of the kingdom of Abomey to the French legion, and eventual surrender and exile of King Behanzin in 1894, Seh-Dong-Hong-Beh and the women were the last to surrender, and even then — at least the Amazons burned fields, villages and cities rather than let them fall to the French. And according to rumors common in the French army of occupation — the survivors took their revenge on the French by covertly substituting themselves for Dahomean women who were taken into the enemy stockade. Each allowed herself to be seduced by French officer, waited for him to fall asleep, and then cut his throat with his own bayonet.

Not so much was told about Seh-Dong-Hong-Beh, her birth, her death or her career as a military women; as the French dissolved the Amazon troops and crushed every structure that may lead to formation of another Amazon army.

Note: Research is being done to uncover more of her story and when we have more, we will surely update the page but in the mean time… We will like to hear your comments.

Edgerton, Robert B. “Warrior Women: The Amazons of Dahomey and the Nature of War.” Westview Press. 2000

Africa Heritages is free and we don’t place ads on our website. We are mostly funded by small donations and unfortunately we have a frustratingly limited budget. If you read our write ups and you find what we do is useful, then please consider donating! You can support our operations via donations to any of the links below: Thank you!!!

Disclaimer: Africa Heritages claims no credits to any of the images used in this historical article.